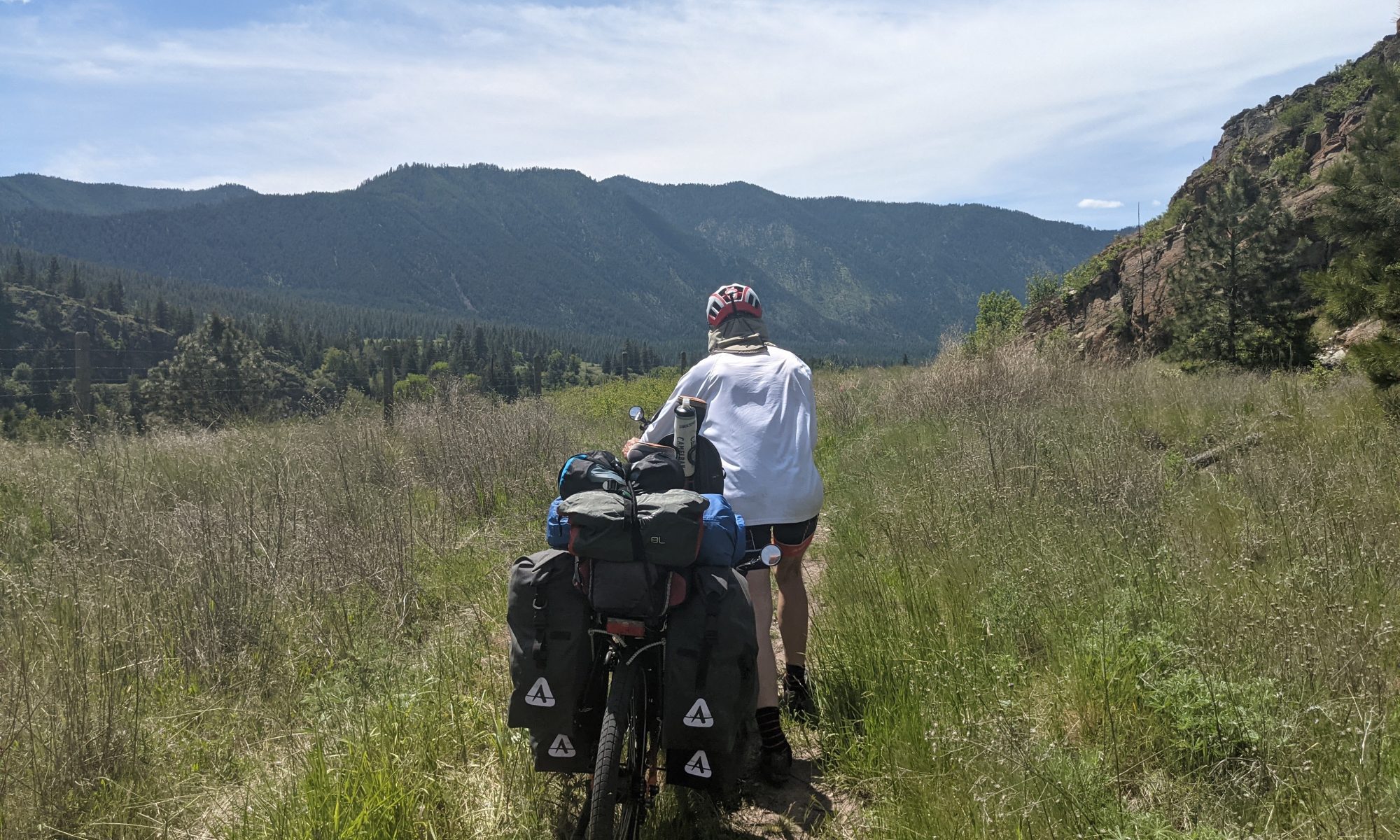 We slept great. The room smelled a bit like smoke when we went in. Within a few minutes the smell of our exercise gear had completely taken over. I guess that is one advantage of how we travel.

We were riding by 8 am and the weather was perfect. We quickly got on a bike path headed west and enjoyed it for about an hour.

The bike path ended and we followed beautiful country roads. At one point we realized our path was about to take us on a significant deviation from the general direction of our travel. We talked with a rural mailman and determined the path we were following wasn’t going to work for us and we started looking for a way to get through the highway fence and onto I-90 when another local stopped and spent about 10 minutes discussing our route, including some decisions we’d make later. We considered backtracking and getting on I-90, but eventually decided to stay on the route, partly based on the good information from the local. It ended up being one of the best sections of our ride today. There was a little bit of dirt road, but eventually we made it to a scenic historical ranger station and got some water, shade, and rest. After eating an apple each we headed out riding down a newly paved road. It was beautiful.

During our descent we realized our rear tire had lost air and we had just topped it off at the ranger station, so we laid the bike on its side (something that works with panniers) and patched the tube. (We have spare tubes but we were not certain we found the only source of the leak: a broken-off goathead from Antelope Island.) This is the first time we are not using Schwable Marathon Plus tires and the first time in all our riding we’ve had to patch a tube during the day. (We had one other flat — two years ago in Germany — but it was a slow leak that we fixed at our campsite.) The fix took about 30 minutes in the hot sun and we were on our way.

We stopped at a tiny but well-stocked and well-maintained grocery store in Alberton, MT, for lunch. How can a can of mandarin oranges, potato chips, corn nuts, and a fruit smoothie juice taste so good? We sat and ate them in the shade on the side of the store and chatted with a few locals who noticed our weird bike.

Eventually we ended up on a railroad grade double track. We rode it for about 4 miles and it was awesome. We arrived at a railroad tunnel that had been damaged in a fire — the super heated rock had expanded and cracked the support structure. The local we had talked to had described it perfectly, as well as the way around it. Unfortunately, not too long after the tunnel, the trail dead-ended at a farmer’s property. Again, this was just as the local had described but in this case we had chosen not to listen to him because all our routing software and Google had told us the trail would be open. Always listen to the locals — especially the old farmers….

We were so bummed. It was looking like we were going to have to backtrack 5 miles and then re-ride those miles on I-90. Pretty soon after turning around Natalie noticed a small gap in the fence that would give us access to I-90. There was a gap because the landscape was such that they couldn’t continue building a fence, due to high rocks and the exceptionally steep embankment — the type of thing one might carry a lightweight and maneuverable mountain bike through and down, but not ideal for a 200 pound fully loaded 10 foot long recumbent. Sometimes in life laziness trumps common sense, so we took our gear off the bike and went for the portage. We were able to carefully maneuver the bike around the fence and down the steep bank to I-90. We made a trip back to fetch our gear, loaded everything up and went on our merry way. Happily we only had to do a few miles on the interstate, there was a big wide shoulder, and there wasn’t a crazy amount of traffic.

We’ve had some strange looks in the past but can only imagine the comments of those passing by on the freeway as we lowered our bike down that embankment.

Soon we were back on frontage roads enjoying a little peace and quiet. Our routing software took us to some beautiful places, but eventually we found ourselves ascending and descending steep dirt roads, and we didn’t really know what we had in front of us. We ended up pushing our bike for a couple hours because the road was too rough and too steep. It was painful because we were going so slow relative to our regular speed but expending much more energy. On the positive side we saw some beautiful remote places in the mountains of Montana and didn’t see any bears. We saw no vehicles or other people for hours. We stopped and filtered some water to replenish our water bottles at a beautiful creek. The cold water was so refreshing. Slowly we hike-a-biked through, focusing on the beauty of the location. It was amazing but tiring. For the record, there was no complaining.

By the time we got out of the mountains we were baked and we were starting to push 6 PM. So we rode into a town called Superior and decided to get a motel so we could clean up and recover from perhaps one of our hardest riding days on tour to date. But again it was also honestly one of the most beautiful. We hit a grocery store for dinner (never shop when famished), cleaned up and ate. Our bike got to join us in our room again.

We made approximately 60 miles, which is about what we did on our first day, but this time gaining 2700 vertical feet and pushing our bike at 2 miles per hour in the heat of the afternoon for a good portion of it. It took twice as many hours to cover the same distance and was a good reminder for us not to judge our accomplishments based on distance traveled. The weather was good, the scenery was beautiful, and the company was perfect. It was a wonderful but hard day and we made several great memories. It is so fun to explore the world together like this. We are happy and comfortable in a motel room, full of food, and exhausted.