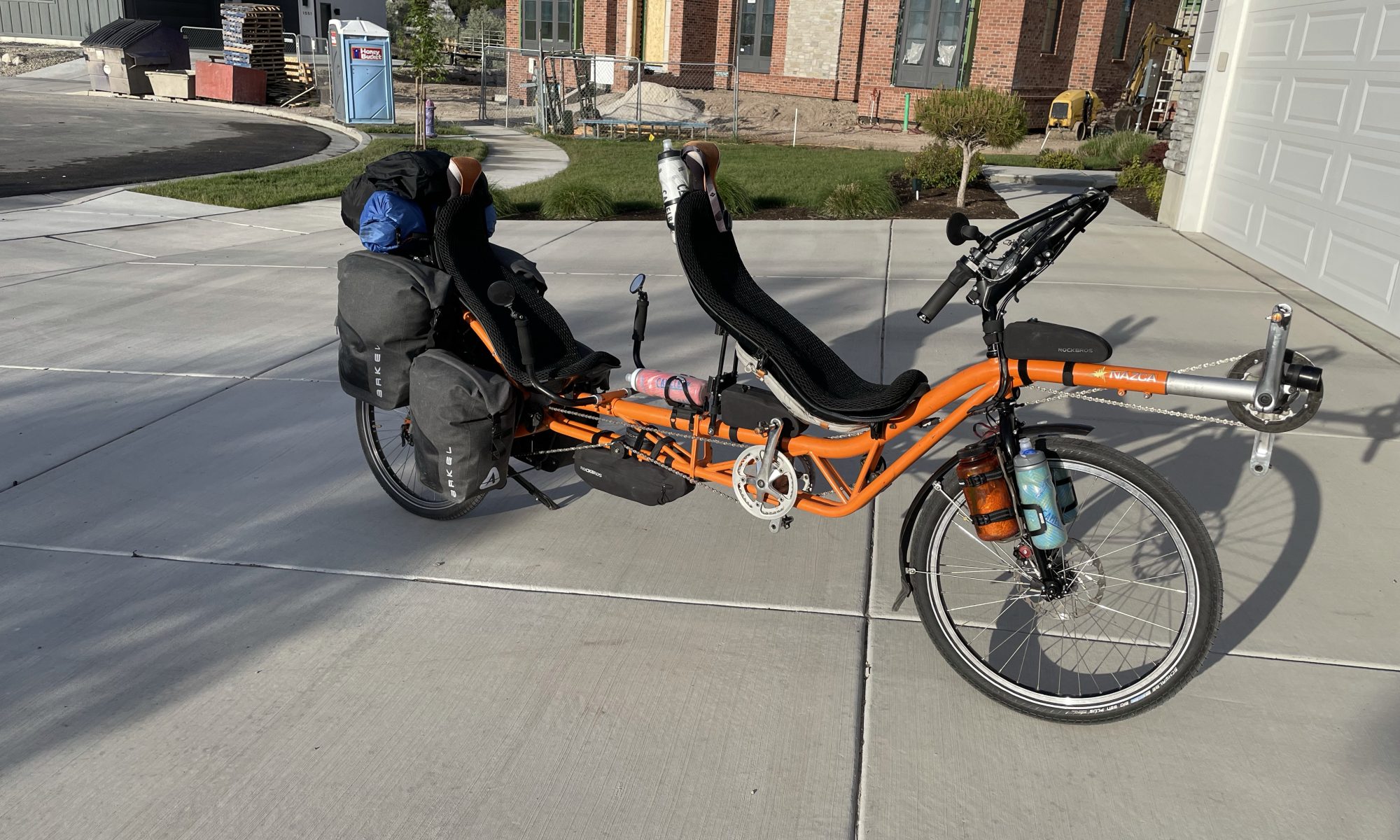 I said I was going to tell you about how we determined our route… Unfortunately we changed our route about every day over the last two weeks, so there wasn’t a story to tell. I started with Kamoot – the routing software we use when riding in Europe. It is great, for Europe. Once I had my route figured out, I’d export it to a GPX file and then load it into google earth and do a fly-through in 3D of the entire route. It was a bit boring, but better than figuring out on our ride that we’ve made a bad selection. Each time I’d do this I’d find something majorly wrong with the route – like it would take us on a path that Komoot thought was asphalt and google earth/maps thought was a handcart trail. Komoot may be right, but it is hard to trust it.

So next I started routing with google maps. It seemed to give me good results, but now I was comparing google maps to google earth, which unsurprisingly had a consistent view of the roads and bike paths. I needed another data source.

My last step was to start using Strava. It has a global heatmap showing where people are actually riding. Using the heatmap I was able to see the places along my route that had very little traffic – which was a good warning sign. Additionally, Stava itself has a route generating function, which had the ability to avoid hills (something that is important to us) and incorporate the heatmap into path selection. This has seemed to be our best option for this ride.

Our current plan is to ride from Hamilton Montana north to Missoula and then ride as far to the west as we can get by Saturday. We’ll take a rest day, then turn around and ride east to Coeur d’Alene where we’ll meet Page and Vance midweek. We’ll ride a big 3-day loop with them and end up in Coeur d’Alene again for our Sunday rest day. If we are feeling strong we’ll finish our ride on Monday with a loop to Spokane and back, then head home on Tuesday.

One important rule for bike touring is to dial in your bike months in advance, and then resist the urge to change it. Being far from home and far from bike shops is a bad place to figure out your new parts don’t work as expected (or aren’t installed correctly.) Perhaps you can push the limits of this rule a bit by having a professional do the install and no matter what, don’t try new parts on your most critical components – things that impact your braking and steering.

In other news, this week I replaced my front fork, headset (thing that connects your front fork to your frame) and my brakes (twice.) This morning at about 4 AM I woke up thinking about the headset and how it wasn’t feeling right. I did a bit of searching and found someone else who had a similar problem to what I felt I was experiencing and he said he ended up flipping the bearing cage for the bottom bearings upside down – with the exposed part facing the crown race instead of the headset cup. Everyone in the forum was mocking him, but in the end his local bike shop told him that is how to set up an FSA Pig (the headset I am using). I did some more searching on FSA’s website and found a diagram which showed the open part of the cage facing down, so I went to the garage and reworked it. To do this you have to take off the fork (and to take off the fork you have to take off the brake caliper) so I basically did everything twice in the last week. The bearing cage was deformed – perhaps from being compressed wrong side up – and so upon removal my garage floor filled with loose bearings. After crawling around on my knees for a while I rounded them up, bent the cage enough to hold them, kept everything in place with some grease, and reinstalled. That ought to work. …

We are going out this morning on a ride close to home, fully loaded, to make sure nothing comes flying off…