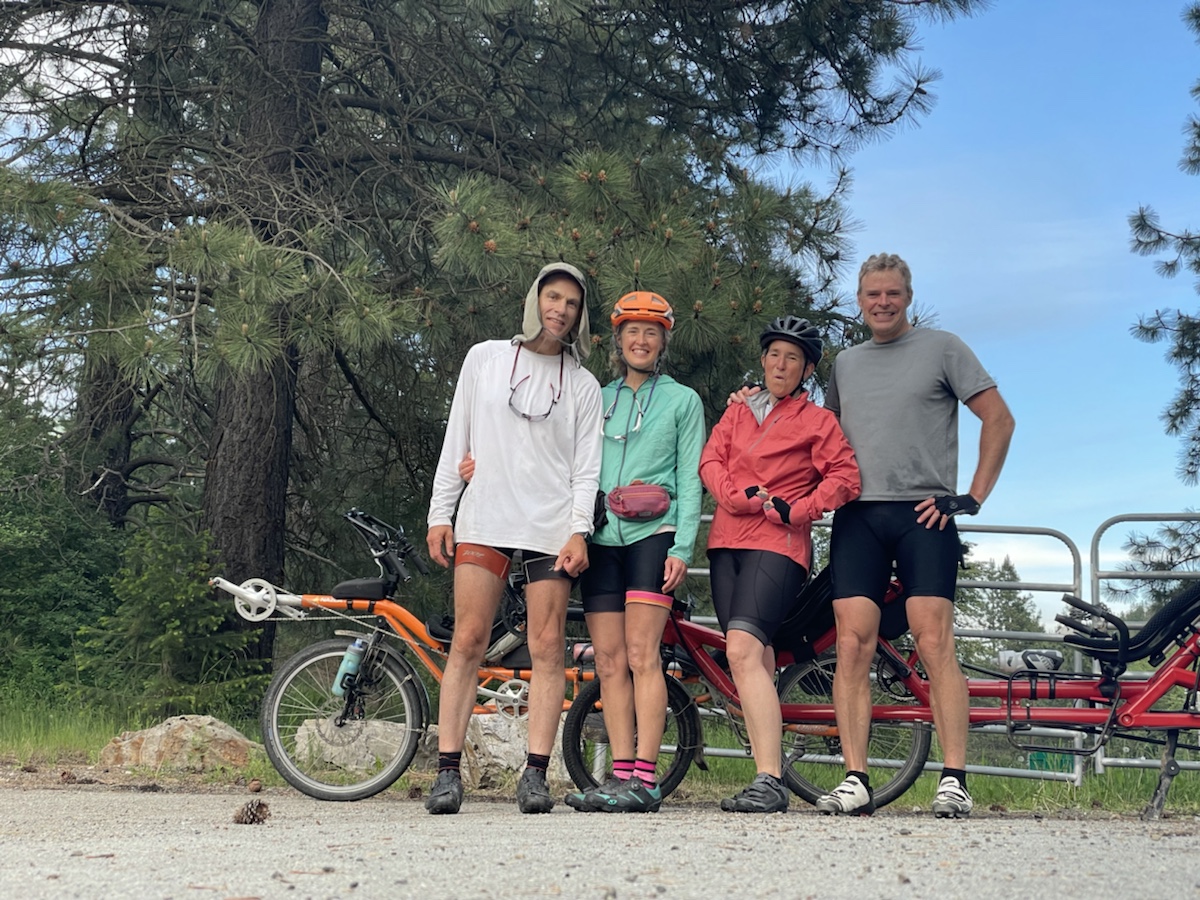 Saturday was a big ride day. We all slept well in Heyburn State Park. It was lightly raining through the night which created a peaceful atmosphere and kept the temperature just right. It stopped in time for our tents to partially dry prior to packing. The campground was much busier due to it being the weekend, but our site was surrounded by trees. We ate, walked by the lake, packed up, and hit the trail around 11 AM. We were riding the Trail of the Coeur d’Alenes all day.

Our first stop was our Airbnb in Harrison where we dropped our panniers. We had a slight routing snafu which had us pushing our bikes up the steepest hills in Harrison only to find we were headed in the wrong direction. It built character.

On the way to our Airbnb we ran into another couple on a tandem recumbent and had a fun talk with them. We had caught a glimpse of them on Friday night. It is so rare to see a bike like ours! The couple’s ages were 68 and 74. We hope we are still biking like this when we are those ages. We’re planning on it!

We rode the Trail of the Coeur d’Alenes uphill again, eventually making it to the end at Mullan in the evening. It was beautiful and peaceful. We enjoyed sharing it with Page and Vance. Once more we felt so happy that former railways like this are being transformed into bike trails. Partway through we met another couple on a regular tandem, who had cycled across the US as well as many other places. Again — fun to talk with people who have similar interests and experiences. We also saw many beautiful and interesting birds, including a few great blue herons. What a fantastic feeling to have ridden the entire trail!

It was a great ride. The temperature had been perfect throughout the day, but as the sun went down we all quickly chilled and since we had left our panniers there was nothing we could do about it. Normally we would have had coats and pants we could put on to warm up.

We had a good dinner at a restaurant in Wallace and picked up Vance’s truck. We drove to a Walmart in Smelterville and bought supplies for the next two days, and then drove to Harrison. It was about midnight. We quickly unpacked, cleaned up, and went to bed.

Our Airbnb in Harrison is perfectly quaint, overlooking the lake. Just the right place to rest and relax. Our total mileage was 78 miles – mostly a slow uphill regaining much of the altitude we had lost on the previous 2 days.