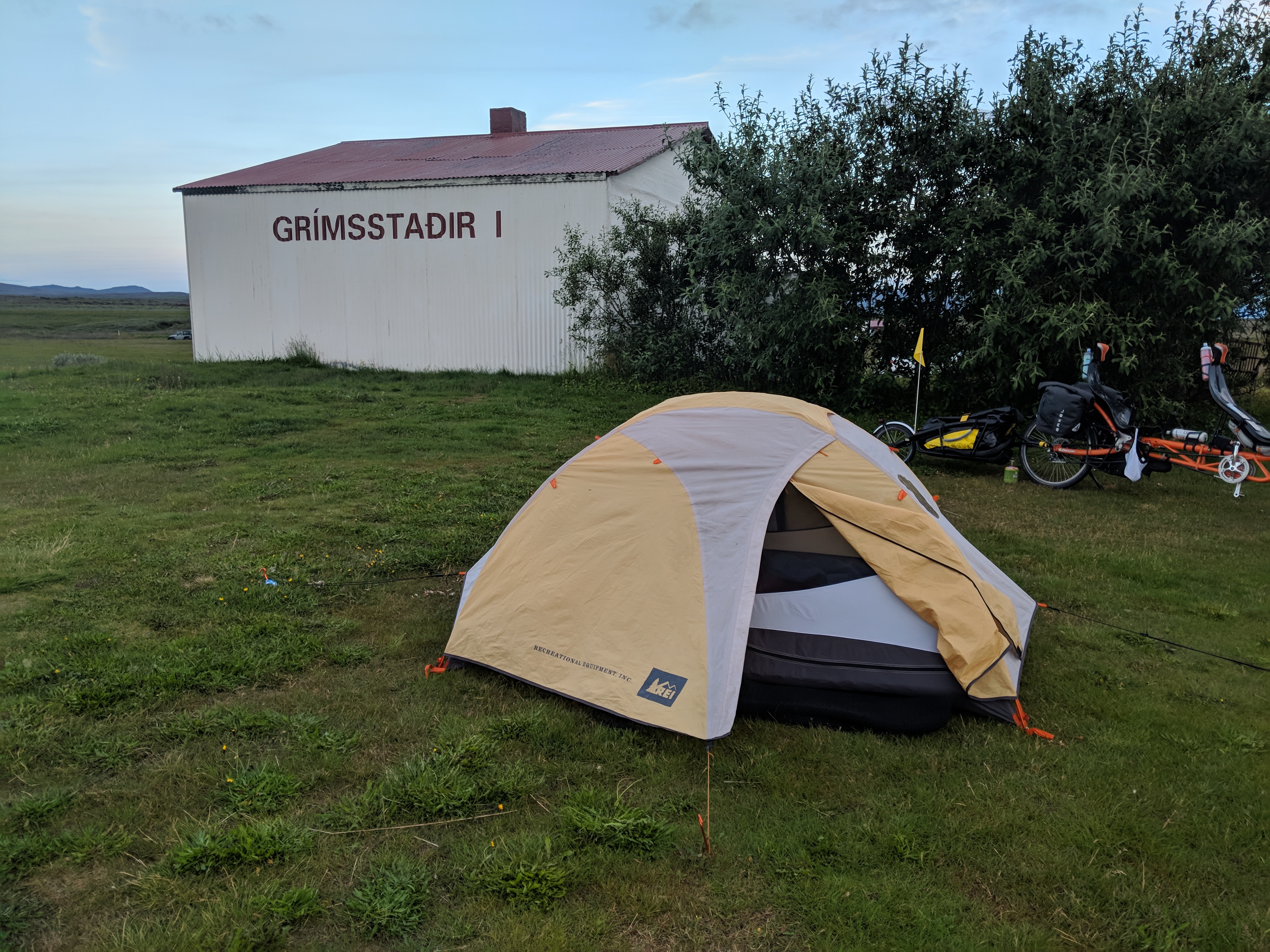 Again posting one day late due to very poor wifi….

On Wednesday we rode from Egilsstaðir to Grímsstaðir. But before I talk about that, I need to mention the swimming pool I went to on Tuesday night. The local pools here are my favorite places to go relax. Even small towns have them. There are usually a few hot pools to soak in and sometimes an ice bath to cool off in and make it so you can start the whole soaking process over. I have a body built for soaking. If our bike breaks down, as long as there is a pool nearby, I’ll be fine. I’ll just soak for the remainder of our vacation. If you go to Iceland go to the local pools every chance you get. America has something to learn from this tradition…. Natalie, for the record, doesn’t enjoy them like I do. Maybe she is missing some important gene or something. So she usually stays and does something else while I go soak enough to make up for her absence at the pool. The pool in Egilsstaðir was perfect. I stayed until I looked like a proper raisin. Nothing else mattered after that – it was a perfect day.

Our original schedule had us riding for 50 miles and camping along the road near an outhouse. (There are surprisingly few along the way – especially when you are on bike and 50 miles is measured in many hours….) The outhouse was in a lovely location and it would have been a good campsite (better than the one we actually stayed in) but we wanted to get more miles with the hope of shaving a bike day off our schedule and doing something touristy like whale watching on Saturday, so we pushed on for another 30 miles. Our map showed a campsite 3 miles off road and even though our bike does poorly on washboard, we felt the investment in time would pay off with a nice campsite.

We bounced into the campsite at about 9 pm on light rain, clocking another 12-hour ride. We were exhausted. Unfortunately the campsite was effectively a small plot of ground next to an outhouse. Gratefully the outhouse had running water and flush toilets.

Grímsstaðir is a settlement in north-east Iceland whose main claim to fame is that its weather station holds the low-temperature record for Iceland of -38°C. Luckily we didn’t experience any of those temperatures. Instead we had to deal with a zillion flies. They were everywhere – unlike anything we’ve experienced in Iceland. We couldn’t even eat outside, so dinner was in our tent. We were so tired that we didn’t even change clothes – just rolled into our sleeping bags wearing the clothes we had sweat in all day, and in the morning we woke up and wore those same clothes today. (Natalie has worn the same kit all week….)

In summary, Wednesday was a hard day with not much of a reward at the end of the long push. We were in desolate but beautiful country. We passed only one small village earlier in our ride.

This day began with idyllic weather: sunshine, blue skies, favorable winds. We ate our guesthouse breakfast, packed up, said goodbye to our traveler friends, and hit the road. Beautiful perfect conditions for most of the day!

Partly because of the great conditions, we banked extra miles (85 miles total this day) and are now a day ahead of schedule.

As we moved higher and more north-central, we went from rolling green valleys, rivers, and farms to a desolate high-mountain landscape. We loved having less traffic because of the remoteness! We did a LOT of climbing — 3600 feet of vertical gain — and our legs could feel it. We saw a huge beautiful rainbow as the weather turned a bit misty and rainy towards the end of our ride.

Not so nice of a campground that night…. I’d give it half a star maybe. We had to ride out 3 miles on a washboard road (in the rain), and the ground was very lumpy. If we hadn’t been so tired after our long high-mile day, and if we hadn’t been kind of in the middle of nowhere, we probably would not have stayed. There was one other campground for miles and we just had to get off the bike. So we stayed. We were the only tent. (There were a handful of car campers.) There were SO many little annoying black flies, it was outrageous. We ate dinner in the tent to avoid them. But the little metal bathroom did have running hot water and flush toilets, which is always nice. (No shower though.) We were so tired and annoyed by the flies we decided to sleep in our bike clothes, which turned out to be a bad idea.