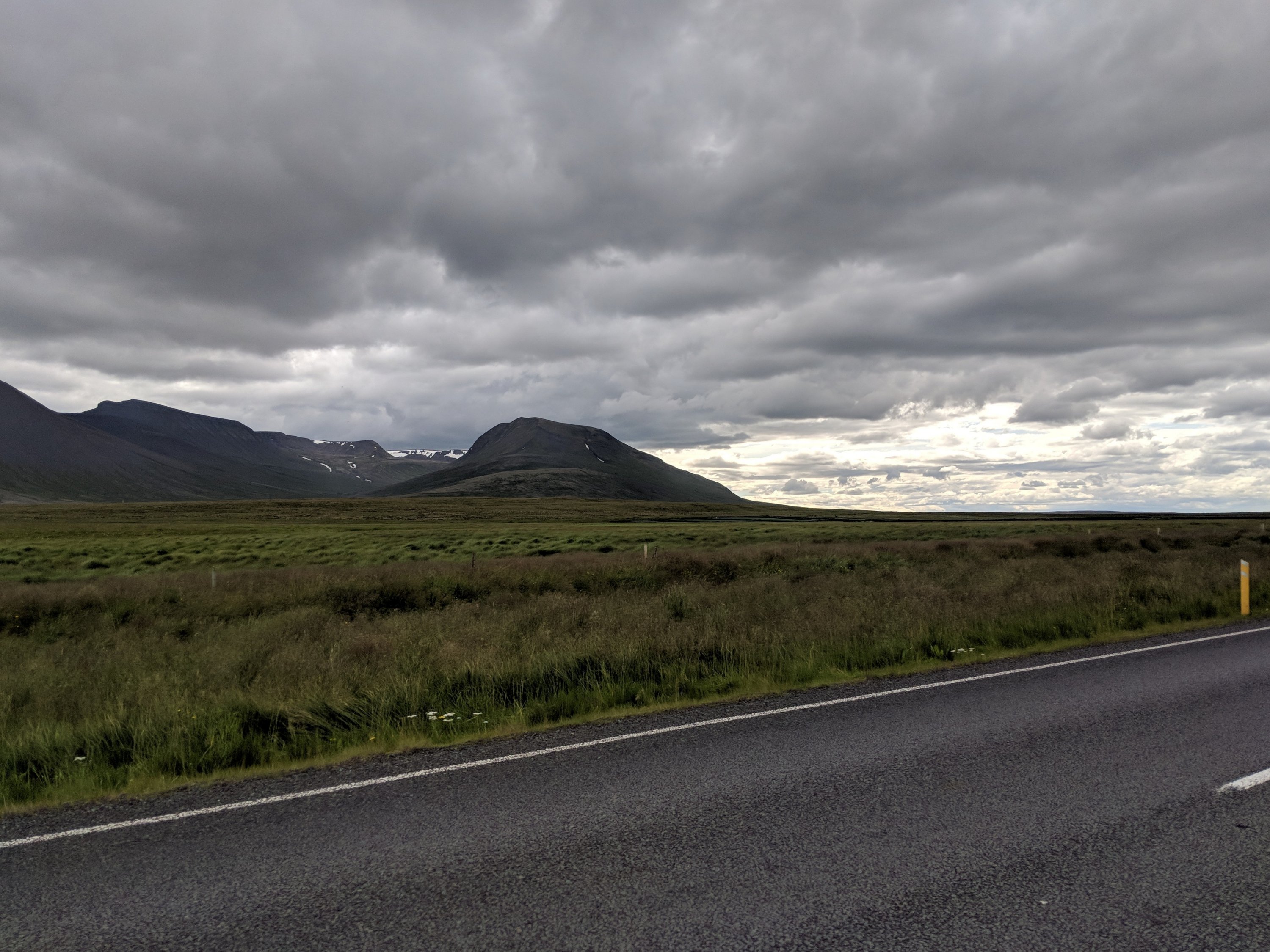 We are in the northwestern region of Iceland. We are working our way around to the west coast, and tonight we are within 100 miles of Reykjavik. Strange to think that we are that close to accomplishing our goal.

A word about campgrounds here: It is interesting how so many campers arrive so late. I’m sure some of that is due to basically no night here in the summer months — you can wander and explore all night if you don’t get tired! Sometimes we’ll get into a campground at maybe 7pm and it’ll be fairly empty but by 10pm it is jam packed. Most of the campgrounds (for 2 people for one night) have been between 20 and 35 U.S. dollars.

The day began with some sun and clouds, which was lovely. Later it got cloudier and eventually rained, but rather softly. Generally favorable winds. We have really truly lucked out on this trip when it comes to winds. Today was maybe 10° F warmer than yesterday and that made a huge difference for us.

We had a few sections of road with a rideable shoulder again, which was very nice. In the morning the traffic wasn’t bad, but by evening it was much busier. I thought most of the drivers were accommodating, however. We didn’t get driven off the road or even close today.

Terrain was similar to yesterday: hills, green valleys and farms, and rivers, with some last views of the northern ocean fjords. Beautiful. But we did not have any crazy steep long hills today!! Yesssssss. That felt great. Lots of small ones but none that were painfully steep or long.

We are in a “self-check-in hotel” tonight, in an area not really close to any particular town. The accomodations are old and simple yet clean, and include breakfast. It was very cheap compared to other places we’ve stayed indoors so far. We used a tea kettle to boil water for our backpacking food and ate in the big room where we’ll have breakfast tomorrow. The hotel is full or almost so. This country is so busy with tourists and local vacationers.

We are tired, probably mostly from our longer day yesterday. We have showered, eaten, rehydrated, and hung up all our damp clothing. We will probably sleep well, as has happily been our norm this trip!

Pete’s note: Tomorrow we will climb our last major hill and then descend to a campground a little north of Reykjavik where we will stay one night and then try to figure out how to get our bike on a bus to get through the tunnel to Reykjavik. (Bikes aren’t allowed in this tunnel, and even if they were we probably wouldn’t want to be in it with the traffic….) It is weird to think this part of our adventure is almost over. We’ll do a few tourist things in and around Reykjavik, as our flight home isn’t until next week. We gave ourselves extra time in case the weather set us back. For us, successfully circumventing the country was as much a factor of the weather as anything else. And as Natalie said above, we’ve been super lucky with favorable weather. The biggest surprise has been the traffic, and I think most of our traffic challenges probably involve tourists — some from countries (like the U.S.) that aren’t always bike aware. And it is just one out of a hundred that buzz by too close and too fast — but it just takes one to create a tragedy and our experience is jaded by the few close calls. Every once in a while we have the opposite experience — someone slows all the way down to our pace, passes slowly, and then gives us a thumbs up out the window. It makes us happy for hours. This type of thing applies to so much more than biking. Hats off to everyone in this world who goes out of their way, often with small gestures, to make the world better for others.