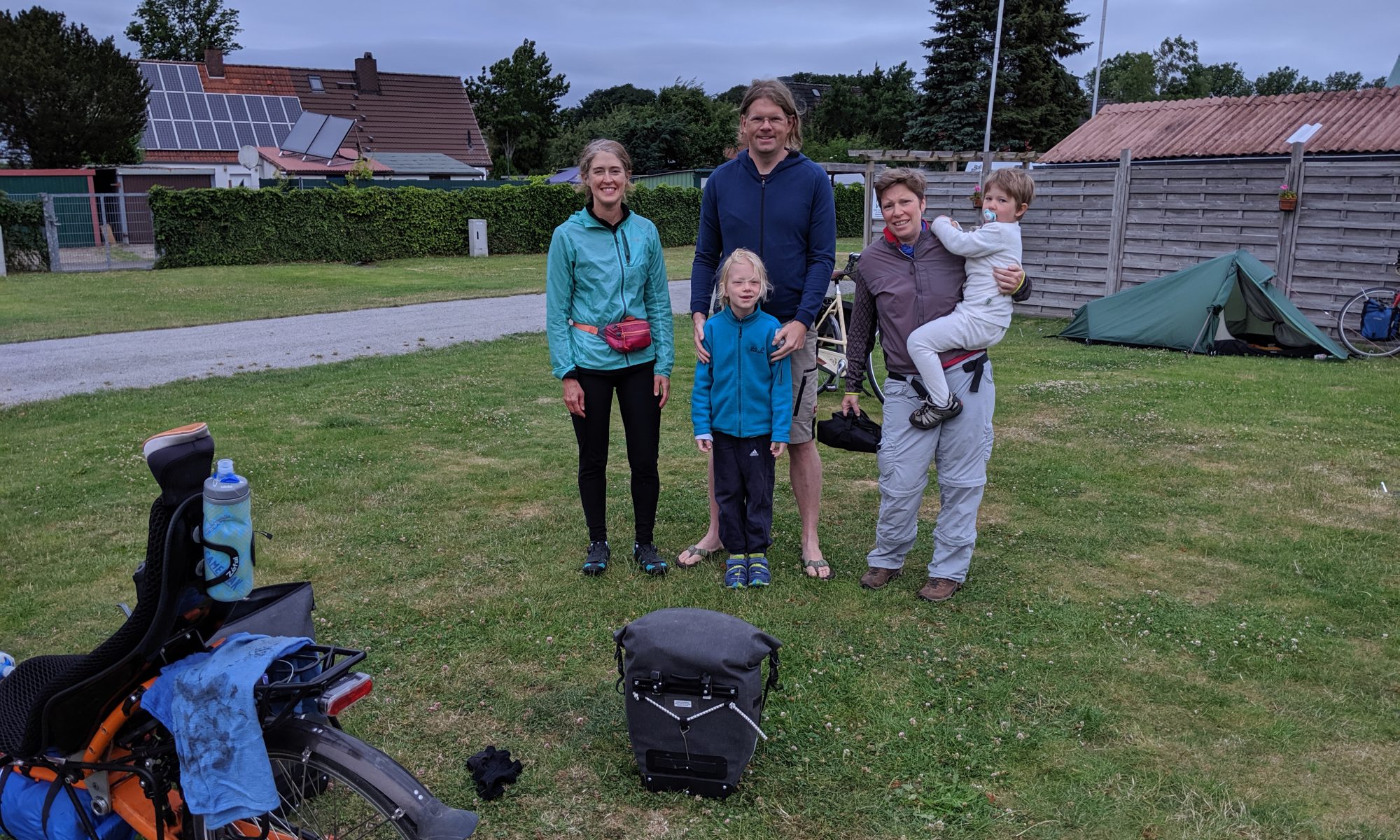 We loved our simple little campsite last night. We shared the tent space with three solo bicyclists and one cute cyclist family with 2 young children. They were very helpful to us, as in Germany we are finding not as many people speak English as readily as in Denmark and Sweden. When we arrived at the campsite last night it was cash only — which took a bit of help from our new friends to understand. We ended up riding into town to find an ATM. We didn’t feel much like riding more after our long day, but capitalism was calling and we had to answer.

Neither of us slept well — but Natalie had an especially poor sleep. In order to fit everything in our two small panniers we needed very small sleeping bags. Therefore our sleep kit had to extend beyond sleeping bags. For example, I brought my down coat to augment my sleeping bag. Natalie had a puffy vest, but didn’t want to dig it out. She ended up being chilled in her sleeping bag. Who knew it would be colder further south? We eventually covered Natalie’s sleeping bag with our rain gear which provided her with enough warmth to get to sleep.

We packed up and said goodbye to our new German friends and noticed the front tire was nearly flat. After 6000 miles I guess we were due for a flat. The German bike paths have been a bit hard on us — the paved paths being rougher than many of the dirt paths in Denmark and Sweden. Several times yesterday we would hit something hard with the front wheel and be amazed we didn’t get a pinch flat. Well, it turns out we did.

We quickly changed the tube and were on our way. We eventually made it to the main ferry for crossing the Elbe River west of Hamburg, missing the ferry by 10 seconds (literally the gate was dropping as we were riding up and this operator wasn’t going to let us on). Luckily there were about 5 running at the same time, so in another 20 minutes we were on our way again. The ferry also only took cash. We had almost crossed the night before, which would have been problematic because had it not been for the campsite we wouldn’t have been carrying cash. Germany is very different than Sweden and Denmark in this way as well. Everything we paid for in those two countries was electronic (usually with my phone). We had a small amount of Danish currency we were carrying with us and ended up spending it last night and this morning at a grocery store just to get rid of it.

The weather was drier than yesterday, but sometimes we had a head wind. The temperature was pleasant, just right.

Today was far more rural than any other day on our ride. We were often on small paved farm roads, only occasionally encountering cars. We would ride past some of the most beautiful homes with yards filled with flowers. Sometimes we gawked too long, missing the opportunity to take a photo. (Most of our photos are taken by Natalie as we continue to move.)

Several times our route would have us dive into the woods, leaving a nicely paved and marked path. It requires a bit of faith that the routing software knows what it is doing. It usually works for us, which is why we keep using it. We see some amazingly beautiful and random places — the types of places we would never see if we were in a car. (Many have been inaccessible to 4-wheeled vehicles.)

Since we had been so rural today we didn’t find lunch until around 3. We looked at route and accommodation options and decided that, since we were feeling flat and had ridden 300 miles over the last 3 days, we would cut the day short at 65 miles and stay in Bremerhaven, where we found a simple and inexpensive hotel room.

Hopefully we’ll rest up well and have a good day tomorrow. We are 140 miles away from our Saturday destination, but we want to arrive early to meet the person from whom we bought our bike. We’ll also try to do laundry, as on Sunday morning we are going to get up early and take a train south to try to attend church with our niece who is serving in Eindhoven. Then next week we ride to Amsterdam and pack our bike. :'( 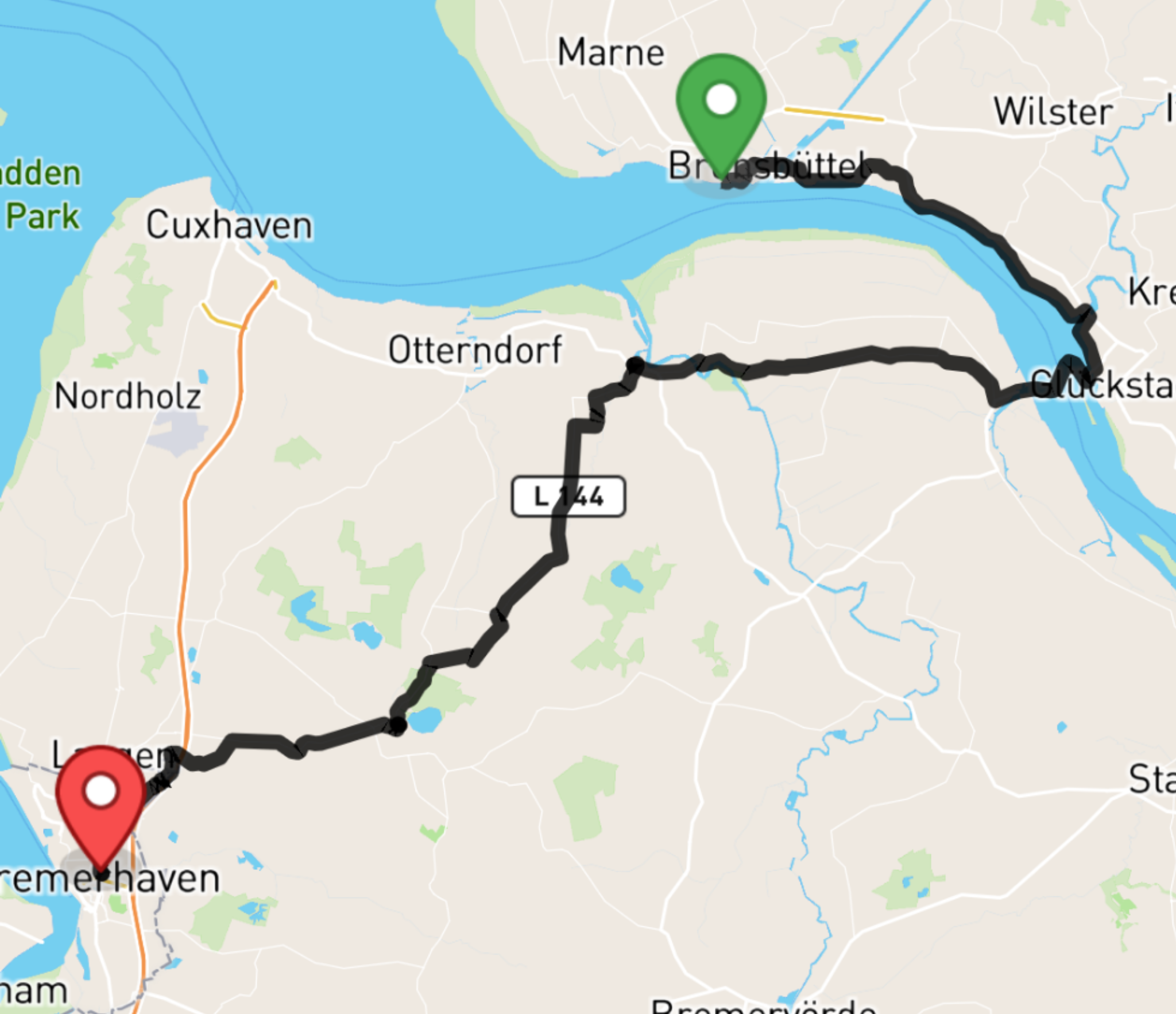