We began a bit later, due to being up so late the night before. It was another day of beautiful weather, high forecast for 82F. We are getting used to riding in the sun all day, so sometimes by afternoon we feel pretty tired and we stop and find a shady place to have a snack and break.

The views today we’re not quite as pretty as yesterday, but still nice. Part of the reason was once again we bypassed some of the peninsulas to take a more direct route. This put about half of our ride on roads and the other half on bike paths. We rode a bit on single track, but it was all very nicely maintained.

As we began our big climb of the day, sweating and pedaling hard, we stopped and talked to a very nice person — riding home from a nearby town — who helped us avoid the remainder of the big hill as well as get off the road with it’s relatively busy traffic! She pointed us to a beautiful new paved cycle way that was not in our routing software. It appeared to have been maybe a rails to trails path, so the grade was much better for our heavy bike and tired bodies. We loved the bike path and appreciated her help so much! It was another case of perfect timing.

Food most of today was just roadside grocery store or small store stops, or stuff from our bicycle “trunk” trail food collection.

In Sweden we rode from Halmstad to Helsingborg, then crossed in the big ferry to Denmark (city of Helsingor). The crossing took about 20 minutes. It was cool to see how they pack in the big trucks right next to us on our bike and the cars. We went upstairs for a bit on the passenger deck and Pete bought a popsicle. It felt like the boat was moving really fast, which it was compared to our ride speed. Plus it was nice to gain some distance without having to do anything but pay. It was about $6 for us and our bike.

It was probably 6:30pm by the time we reached Denmark. Once across I really wanted to visit Kronborg Castle (associated with the story of Hamlet), since I teach high school English. It was closed but we rode all around and took photos. The moat was cool and it’s a beautiful castle, right on Baltic Sea very close to the ferry landing.

In Helsingor, we had a hard time finding somewhere to stay or eat. We had a few dead end ideas but finally found veggie pizza and salad. Getting food helped us think clearly as we searched for somewhere to sleep. We talked to a nice local person and got a recommendation for a free camping place, but when we checked it out the public toilet there wasn’t working and it was a bit rowdy for our taste, so we rode a few more miles to a pay campsite and stayed there. It is simple, quiet, clean, and cute. We were able to use the pay showers which felt wonderful after a hot grimy day.

Many people here set up elaborate tent homes connected to their camper trailers. It is hard to describe how fancy these are. They have fences, tables, and even potted flowers and plants. One person even had a weed whacker leaning against their “home” because who knows when you’ll have the urge to do a bit of yardwork on vacation?

We rode about 65 miles. By the time we got to the camping where we stayed, it was almost 10 pm and the host was closing up. Glad we made it in time.

So far Denmark seems more expensive than Sweden, but may just be area we’re in.

On to Copenhagen next! Thanks Sweden! 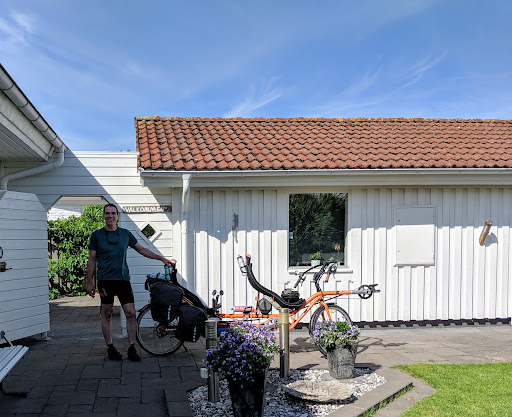