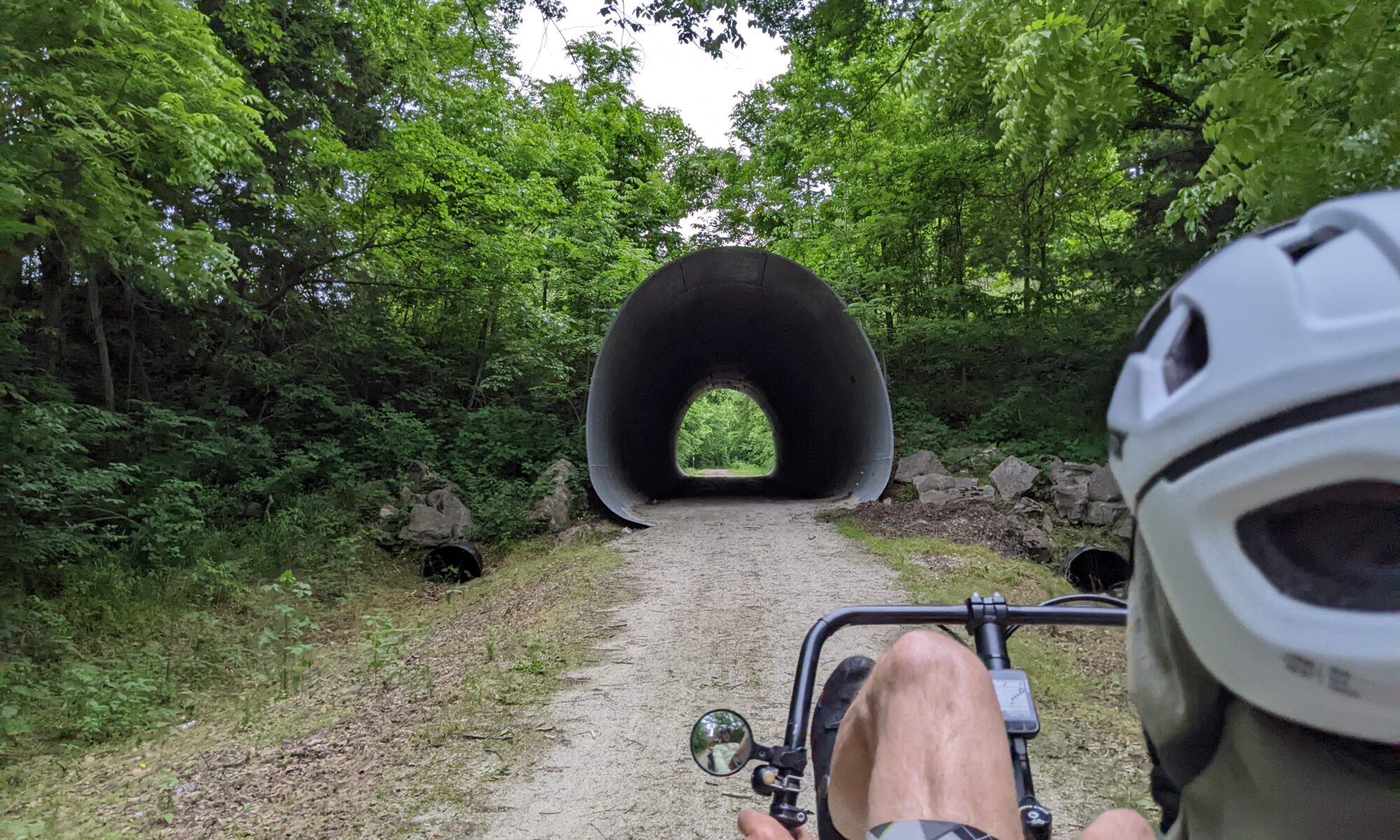 We left at 8 am from Clinton, after a good rest day. Our stomachs were full of food and juice and our bodies were well rested. We rode at an easy pace, drinking extra water. We were determined not to wear ourselves out as much as we had Saturday. We succeeded!

We rode 65 miles from Clinton to Pilot Grove, and with stops included it took about 12 hours. Progress seem extra slow with our trailer. We’ve overpacked. The weather was similar to Saturday: very warm (high about 92) and humid, but also quite windy. In fact, we had a good tail wind pretty much the whole day, which was great. The day became overcast sometime after 4pm and helped us not be so hot  Beautiful ride, beautiful trail, thick green trees and forests, interspersed with pretty prairies and farms and small towns. Lots of historical signs and info along the way regarding the former MKT trail line, the Lewis and Clark expedition, and more. We passed the high point (in feet above sea level) of the Katy Trail, which is 900-something feet, which of course is kinda funny to Utahns who live at about 4000 feet.

We ate our healthy, yummy camp food and are sleeping in the city park of a small town called Pilot Grove. We have met lots of other nice bike travelers. In fact, two sets of them (riders we had met earlier in the day) were already at this city park to camp when we got here! We are slow compared to other cyclists. We brought a 4-person tent in this trip (where we usually bring a 2-person) and it feels extra spacious. 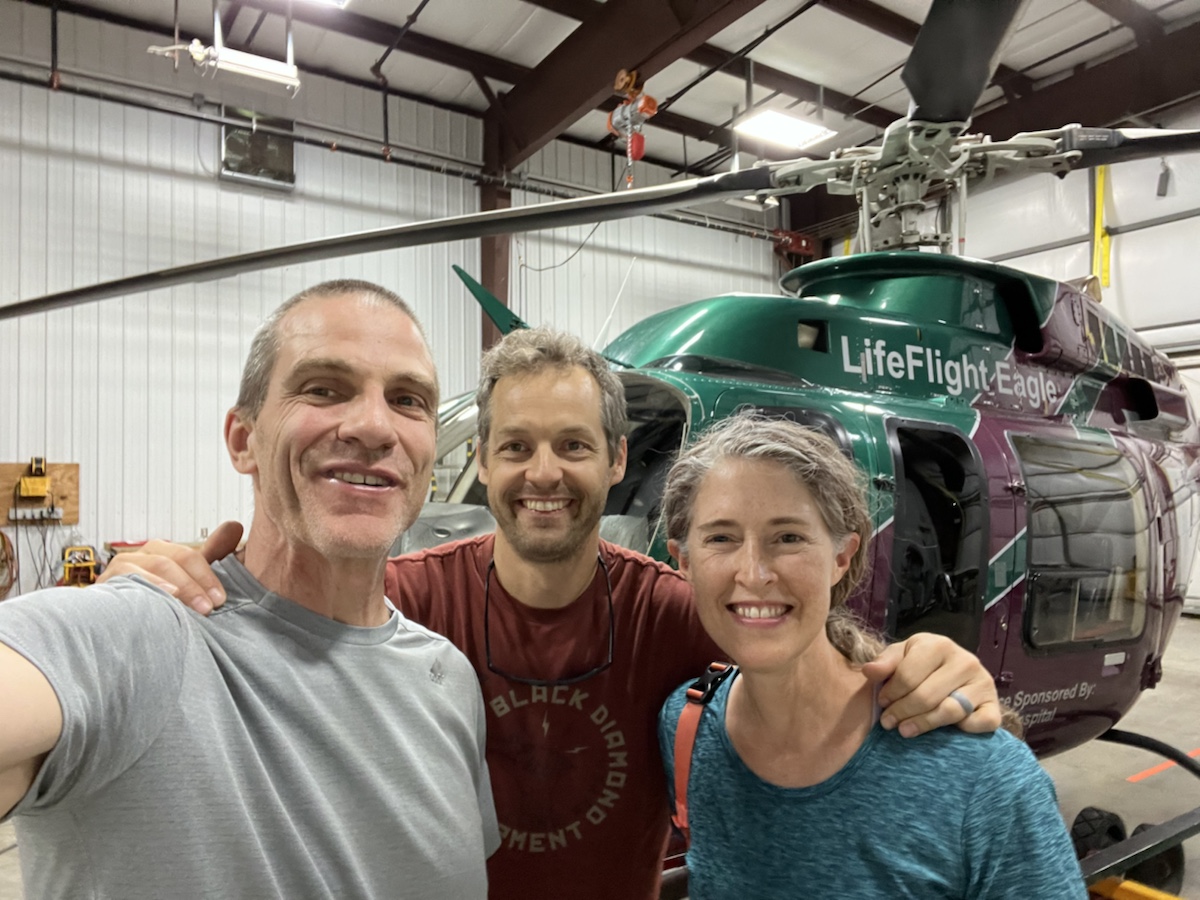 Today we had a day of rest in Clinton. Our hotel is comfortable (air conditioning is magic). We mostly rested today. We were able to attend our home ward via zoom. It is wonderful to connect in that way when we can’t attend in person.

In the afternoon we spent some time with my (Pete’s) cousin Dan who is a life-flight helicopter pilot based out of Clinton. We were able to see his helicopter and meet his family. It was fun to talk to his girls and see them roll their eyes at him just like he used to roll his eyes at Uncle Tony.

We are dialing back our near-term ride plans to ensure we don’t get ourselves into the same exhausted spot we got ourselves into yesterday. Hopefully it will make a difference over the next few days as our bodies acclimate to our activity and the weather. 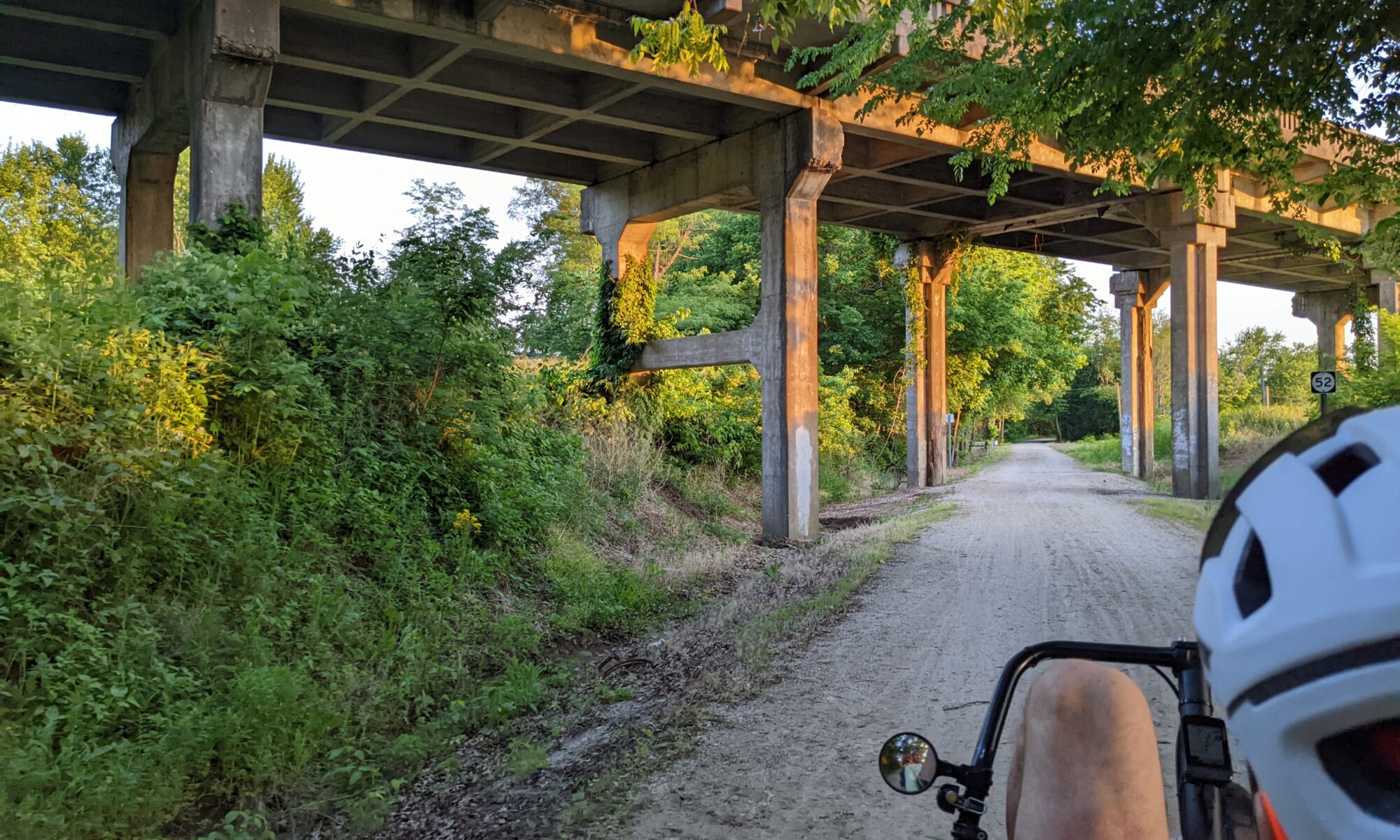 It is Sunday and we are resting in a hotel in Clinton, Missouri. Yesterday started with Pete going early morning water skiing with Zack, Mary, and Eliza. They live on a lake and ski many days a week during the warmer seasons. Both Zack and Eliza skied while Mary was the designated driver. They pulled me too. Like riding a bike, I could still manage to ski, but also like riding a bike after not riding for a long time, it wore me out fast. It seems that many of the muscles used for water skiing are different than the ones I regularly use.

Thank you so much Mary, Zack, and girls for your hospitality and letting us stay with you.

We started our ride from their house around 10 AM. Because of some last minute changes our ride was beginning on Saturday instead of Monday and our planned first day ride was adding an extra 20 miles to get us to a better place to hunker down for Sunday.

We rode on rural surface streets from Mary and Zack’s house to the Rock Island Spur of the Katy Trail. It was beautiful and peaceful and a good reminder of why we loved living in this area 20 years ago. It was also immediately apparent that our packing was a bit heavier than any other ride we’ve been on. We may have overpacked quite a bit, as the miles were extra slow and extra hard. I found myself worrying early on: “at this rate we will not make it to Clinton until 7 or 8 pm.” Spoiler: we rolled in around 11…

The Rock Island Spur is a beautiful section of the Katy Trail going from Lee’s Summit to Windsdor, where it intersects the Katy Trail proper. The inclines and declines are gentle, which is normal for a rail trail. However, we found the inclines more difficult as the day wore on. This was partly due to our load, the heat, and this being our first ride with this heavy configuration.

The trail here is so peaceful, and it was surrounded by beautiful green trees and fields. Much of it is shaded, which is great in the heat of the day. Occasionally it passed near small towns. It is so great to ride with zero cars. A couple of hours into our ride another tandem recumbent bike rode up next to us! This type is bike is very unusual, and only a few other times have we encountered another. So we stopped and visited and exchanged stories with the riders. We also took photos.

Around 4 PM I started to feel the effects of the heat and our exertion and needed an extended rest under the bike (by extended rest I mean like an hour). Had we known the trail better we would have realized there was a good rest stop only another mile or so beyond where we stopped. We considered riding on the highway directly to Clinton at this point, but the shoulder was narrow and the traffic was such that we felt our safest option was the much longer route on the trail.

At this point progress was slow — about half of our normal pace. Eventually we made it to Windsdor where we bought some simple snacks at a gas station and then headed out on our final leg to Clinton. The sun went down and our riding conditions improved as far as temperature goes, but we were tired. We do have an excellent headlight, powered by our bike, so we could navigate the trail just fine. The comet temperature was very helpful. Another plus of riding in the dark, especially for Natalie, was that we got to see myriad dancing fireflies all along the trail. This is magical and reminds Natalie of her childhood in Massachusetts as well as of our years together in Virginia and Kansas. However, at this point we struggled to keep up much of a pace and arrived in Clinton quite late. Our last couple of miles were on small-town rural roads in Clinton, but we have a very bright red rear flashing light as well, and the few cars that were out thankfully gave us plenty of space.

We are safe but exhausted. 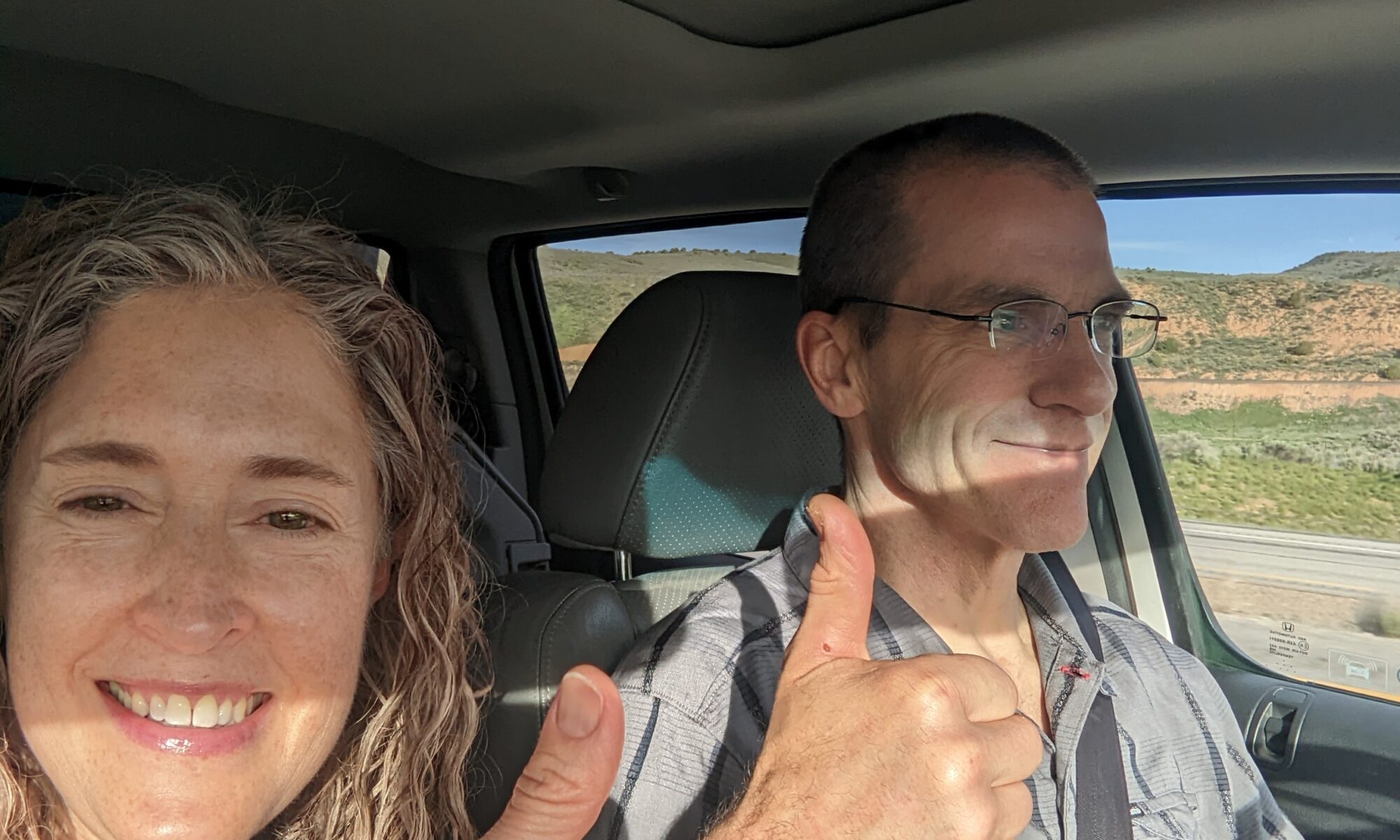 We started our adventure by driving from Salt Lake to Kansas City, through Nebraska. The drive was happily uneventful. It’s a long drive, but we were able to do it all in one day. We didn’t arrive at Mary and Zack’s home until about 11pm, and then we visited with them for a bit before crashing. Natalie was thrilled that one firefly followed us into their house when we arrived! Mary caught it, and we tried to get a few pictures of it before she released it in their backyard.

This year, we ride from Kansas City to St. Louis. I’ve been spending extra time over the last few weeks getting ride miles in, but we are definitely not in the same shape we’ve been in for previous rides. We are leaving the day after high school lets out.

This year we will be hauling our trailer because we intend to camp far more nights than in the past. We will be riding on the Rock Island Trail and Katy Trail. Our plan is to ride about 600 miles across two weeks.